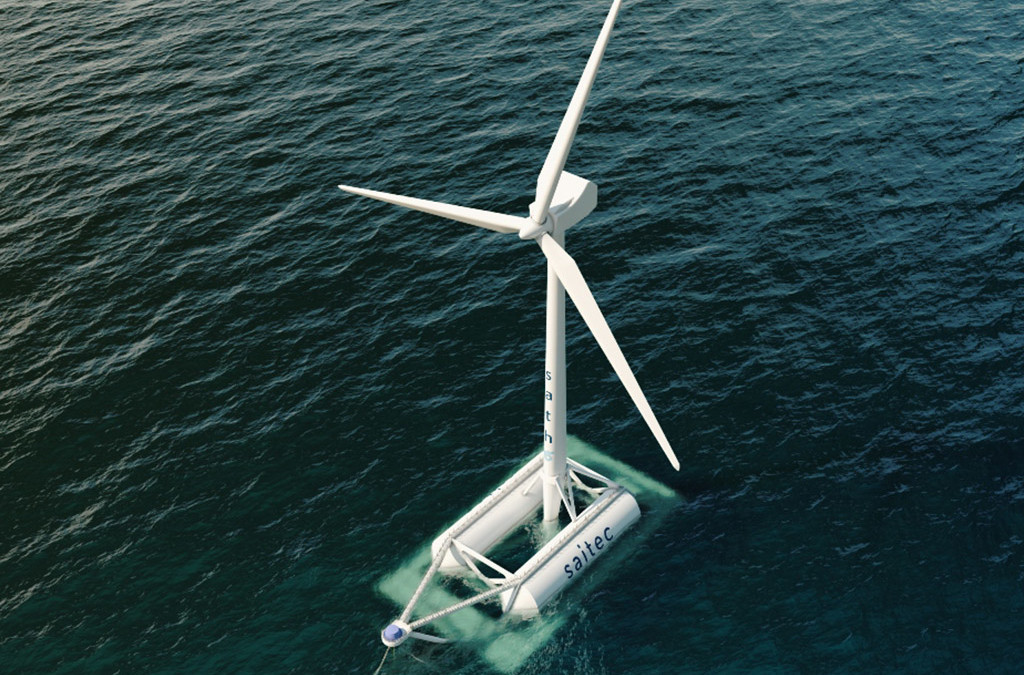 Spanish engineering consultancy Saitec Offshore has secured almost €2m from the European Commission (EC) to build a part-scale version of an innovative concrete floating wind turbine design that promises to have a “levelised cost of energy like onshore wind” when built at its full 10MW-plus size.

The EC funding, awarded under the Horizon 2020 scheme, will be put towards building a deploying a 1:6 prototype of its SATH ( Swinging Around Twin Hull) design for a 24-month offshore testing programme to de-risk a 2MW demonstrator, known as DemoSATH, in Q3 2020.

“Through this project we want to de-risk the DemoSATH demonstrator and get a unit in the water, test assemblies and various concrete mixtures [for the hull] but also to accelerate the commercialisation process of the 10MW-plus model, as a way of tackling the past and the future at the same time,” Saitec chief technology officer David Carrascosa tells Recharge.

“We are analysing three potential sites [for the part-scale SATH] at the moment,” he adds. “We expect to make a decision [by June] for this stepping stone.”

The flagship is slated to be commissioned in October, with Saitec currently in discussions with several turbine OEMs, though it is not yet disclosing a preferred supplier.

“This [EC] funding, of course, has an impact on our commercial activity we are involved in,” says Carrascosa, pointing to the company’s current tendering to deliver SATH foundations for 12MW turbines “on several sites in Europe and Asia”.

Along with deployment of a flagship prototype, Saitec is also collaborating with a certification body to advance certification plans for the 10MW-plus SATH floating platforms.

The SATH design is based on a joined pair of cylindrical pre-stressed concrete hulls anchored to the seabed via a single-point mooring system that allows the unit to swing like a weathervane to face the wind. The concept has previously been put through an extensive part-scale testing campaign in wave tanks at the University of Cantabria’s Instituto de Hidráulica Ambiental.

Saitec is part of a new wave of floating wind technology developers, including compatriot X1 Wind, which recently reeled in EC funding to commercialise its PivotBuoy design off the Canaries, that is approaching the coming market with mass production in mind.

“The first thing to us is scale up; that makes the [economics] for everyone much better. But yes, [mass production] of this new generation of technology gives us a new opportunity of reducing the cost,” said Carrascosa. “And there are also several innovations now that we are planning — strategic statements of technology — [including] a low-draft platform, so construction in port is possible, reducing cost and risk and installation.

“The biggest thing about floating is that it will be able to make offshore wind bigger globally and take it to a wider range of sites around the world.

“Once you get a first commercial floating wind farm, the next ten years is going to be crazy [in now many project will move forward].”

The world’s first commercial-scale floating wind farm, Equinor’s 30MW Hywind, was brought on line in late 2017 off the Scottish coast. Four separate 24MW array projects are to be built off France with installation foreseen in 2020-21, following green-lighting by the EU earlier this year.

Portugal also has an array project, the 24MW WindFloat Atlantic, under construction. And back in the UK, the 2MW scout turbine for the 50MW Kincardine array, off Scotland, was moored last year. Ireland is the latest to join the floating wind build-out, with a first unit destined for switch-on in 2022.

Latest calculations from wind industry advocacy body WindEurope suggest some 350MW of floating wind capacity will be switched on in Europe by 2021 via a raft of projects off the UK, France, Portugal and Norway.

From a single industrial-scale prototype in 2009, floating wind has progressed at a clip toward commercialisation. Many analyst forecasts, including those of UK low-carbon business development body Carbon Trust, point to a fleet as large as 15GW by 2030.