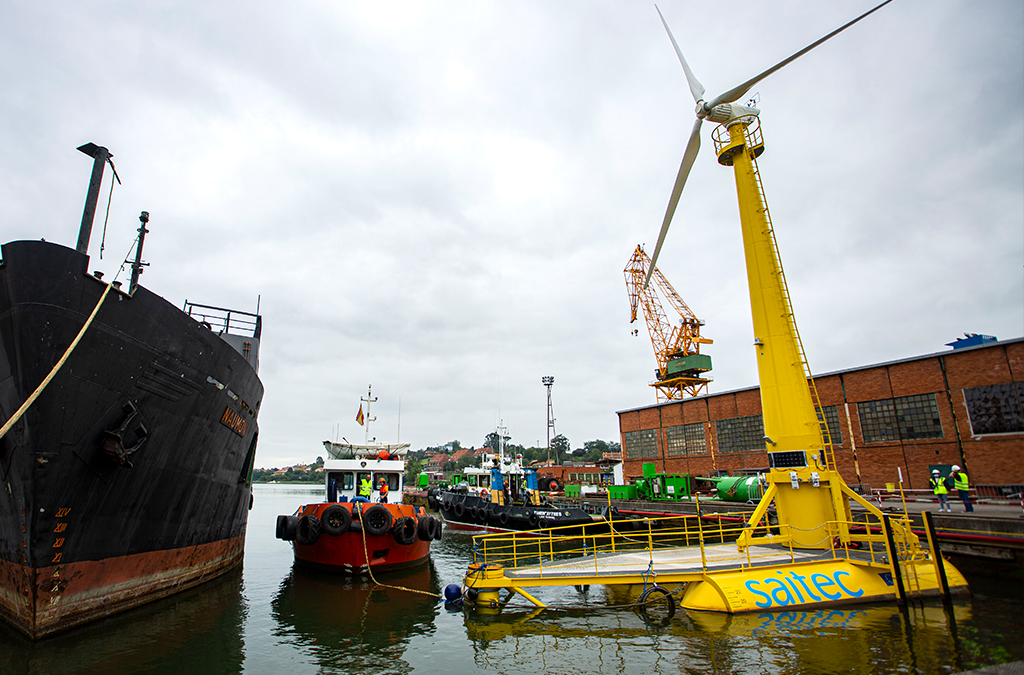 BlueSATH floating wind platform has been installed and commissioned in its final deployment site in El Abra del Sardinero (Santander, Spain). The Spanish engineering company Saitec Offshore Technologies has set off towing operation from Astander’s Dock Pontejos, where it was tied up for its set-up, towards its destination 800 meters away off Cantabrian coast. Then, the already-laid mooring lines were retrieved from the seabed and the platform hook-up was accomplished in less than 3 hours. Finally, commissioning offshore has successfully been completed so the turbine is ready to operate.

Testing will take place in real sea environment with the deployment of a 1:6 scaled prototype of a 10 MW wind turbine using SATH floating technology, (Swinging Around Twin Hull) an innovative, competitive and cost efficient solution for offshore wind industry which has been validated in several water tank tests since 2014.

The location in El Abra del Sardinero has been chosen due to its ideal characteristics to carry out the tests as it offers scaled conditions that perfectly adapted to BlueSATH platform.

David Carrascosa, CTO Saitec Offshore Technologies, has commented that this is “the definitive step to test the technology in real conditions”. He has also affirmed that this kind of energy has a very high local content, so it is a lever to generate employment. In addition, he has remarked that this is an emerging market that has huge possibilities by removing the depth barriers. And he concluded by saying that “we are facing a very good opportunity for Spain to once again be a pioneer in renewables”.

For his part, Miguel Ángel Revilla, President of Cantabria, has declared that “this is a commitment to the future that will undoubtedly have a very important market. This is the result of people from Cantabria and the Basque Country”. He also added: “I am proud that in Cantabria there are people who work in the production of renewables. I wanted to come here today to congratulate them and to show my support on the future of energy”.

Finally, Francisco Martín, Minister of Innovation, Industry, Transport and Commerce of the Government of Cantabria explained that “Cantabria has demonstrated its vocation for specialization”. He has also expressed feeling “satisfied and proud of the Cantabrian companies that have participated so this project can become a reality today”.

BlueSATH tests conclusions will be applied to the following full-scale model DemoSATH (2MW). A project that has the support of RWE Renewables and that will be installed in the Basque Platform for Marine Energies (BIMEP) in Armintza in 2021.