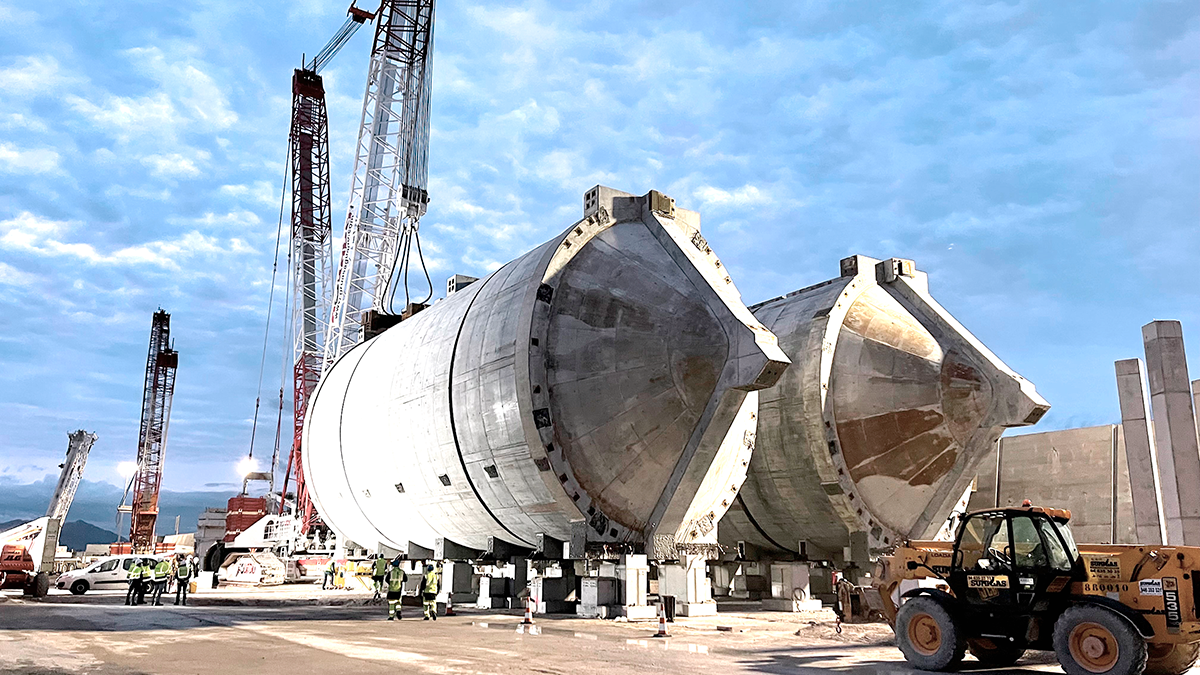 DemoSATH manufacturing works speeds up in the Port of Bilbao (Spain). The latest milestone has been the handling operation of the prototype. This consists of lifting, pivoting, and positioning the 6 precast elements that have initially been prefabricated. These elements compose the floaters of the platform and include 4 conical elements (2 per floater) and 2-cylinder elements (1 per floater).

DemoSATH prototype consists of two hulls, each having three prefabricated segments. The positioning and pivoting maneuver of these pieces has been carried out using two cranes with capacities of up to 500 tons. These cranes have raised the pieces 14 meters high and have transported 150 meters away to the specific construction supports at the foundation slab that has been specifically designed and constructed for this purpose. It is remarkable that the floater positioning results had an error below 1 centimeter.

Beginning in November 2020, DemoSATH construction and assembly works have been led by Ferrovial, world’s leading infrastructure operator. Since then, the main milestones of the project include the construction site preparation, intensive campaigns on the dosage of concrete to suit the design requirements, and the completion of the first precast phase, which includes the complete execution of the floats.

The next phase involves the full assembly of the prototype and the execution of the rest of the elements of the platform. At the same time, new precast phases and movements of large components will be done, such as the installation of the tower and the wind turbine.

In this joint pilot project called DemoSATH, Saitec Offshore Technologies and RWE Renewables will test SATH floating platform in which will be mounted a 2MW wind turbine. The base of the structure will be approximately 30 metres wide and 64 metres long. The platform will be towed to its anchorage point in a test field (BiMEP) 2 miles off the Basque coast (Spain) where the sea is about 85 metres deep. DemoSATH will have the potential to produce electricity for 2,000 homes.

This project aims to collect data and gain real-life knowledge from the construction procedure, operation, and maintenance of DemoSATH floating wind platform.