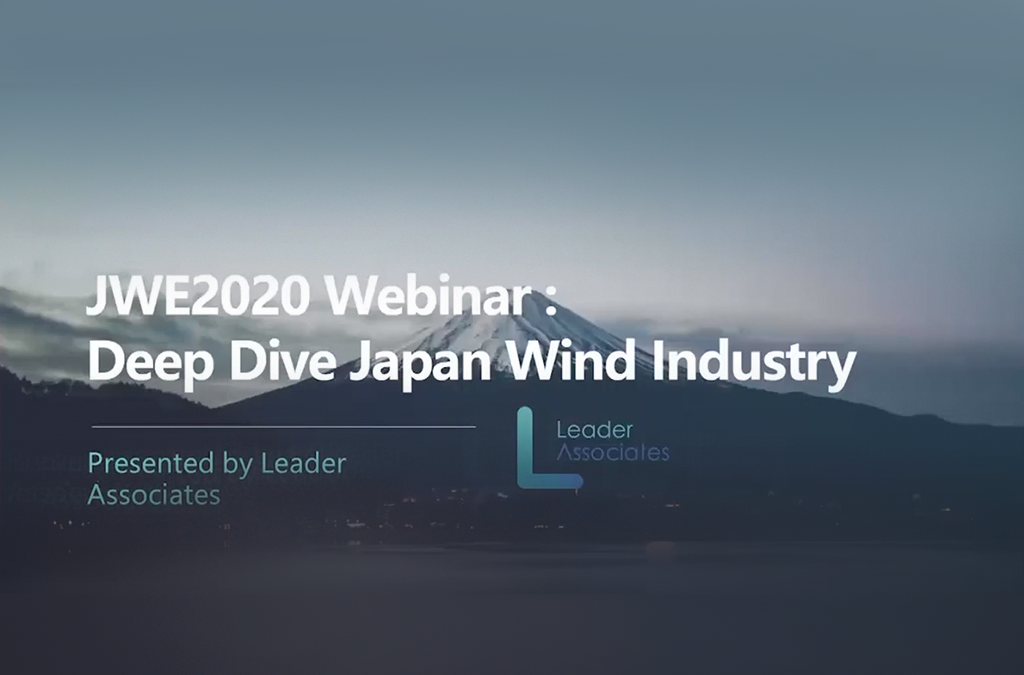 Japan must be floating. This is the key lesson we could learn during Deep dive Japan wind industry webinar held by Leader Associates on 29th May 2020. The speakers Gunnar Herzig, Akio Hasegawa and Luis González-Pinto shared different approaches but the three of them agree about the big opportunities for offshore wind projects in Japan in the following years.  Luis González-Pinto, COO Saitec Offshore Technologies, was invited to participate in the keynote session Japan Floating offshore wind readiness. Find below the main conclusions from the three speeches.

During his presentation, Gunnar Herzig, Managing Director World Forum Offshore Wind -WFO, highlighted the most important milestones Japan has achieved such as the regulatory framework approved in November 2018. An important step that sets the basis for future developments. After this, in July 2019, the Japanese government announced 11 promoting areas. Seven of them require some further development. Meanwhile, four are already prepared for auctions.

He also explains the players involved in the offshore wind market. On one hand, there are Japanese companies working along with international companies (RWE Group- Northland Power…), and, on the other hand, there are Japanese joint ventures. Marubeni, together with a large number of Japanese companies, is working on the Akita prefecture. At this stage, is the most advanced project in the country with a 140MW capacity installed.

Herzig underlined the potential of floating offshore wind given Japan’s location surrounding by deep waters. “We could really see this momentum for offshore wind”, he remarked.

To conclude, he talked about Japan as one of the most promising offshore wind markets so, from his point of view, is just a matter of time to see up and running offshore wind large scale projects.

Even though Japan has challenging natural conditions, Akio Hasegawa, General Manager Renewables Consulting Group, focused attention on its untapped potential, as the country has the 7th longest coastline in the world.

In his introduction, he brought up some information from Japanese Wind Power Association (JWPA) that predicts ambitious plans to increase the offshore wind installed capacity to a combined 37GW by 2050 (18GW from floating).

Hasegawa showed the progress that the country has made from the first policies and promotion attempts, followed by the elaboration of technical guidelines to finally develop the first demonstration projects.

From his point of view, policies, design standards and infrastructure are prepared but some specific issues should be considered such as fishery, earthquakes, grid capacity constraints or design standards.

Although Japan has taken a different approach from Europe, he found that the legislation is clear enough now and allows projects to move forward as they can include local stakeholders from the beginning.

He underlined the good experience between local governments with fishermen, a key point to foster further developments. On the other side, grid connection seems to be one of the biggest limitations as it is a quite complex matter. Unbundling of Electric grid system has already started but EPCOs still hold some control and the connect and manage process needs to be clarified. The Japanese harsh environment (typhoons, earthquakes, tsunamis, soil liquefaction) is remarkable causing an increase of cost. This is particularly important for bottom fixed foundations while floating is not that much affected.

González-Pinto also summarized few points to put in context the Japanese Floating Wind market. The first idea was the general negative view of Fukushima Forward project as it did not give the expected results. This opened the market to the introduction of overseas technologies in order to bring cost down.

Secondly, he remarked that a design conservative approach could be overcome if the requirements were clarified.  He also mentioned that those approaches are a barrier and represent a missed economic opportunity.

Finally, to avoid high manufacturing costs he explained that some companies have decided to import floaters from other Asian countries. A clear disadvantage for local content. Saitec Offshore’s preferred option is to adapt to manufacture in Japan. He found that this is the best way to boost local content, as this is a key factor in the project.

He ended explaining that international know how produced in European Offshore Wind might be the base of global offshore wind, but it is not enough to reproduce other models. González-Pinto emphasized that it might be better for Japan to develop a floating offshore wind market focused on its own strengths to make the most of the economic opportunity.